« To take hands in the street. My dream… To feel free » 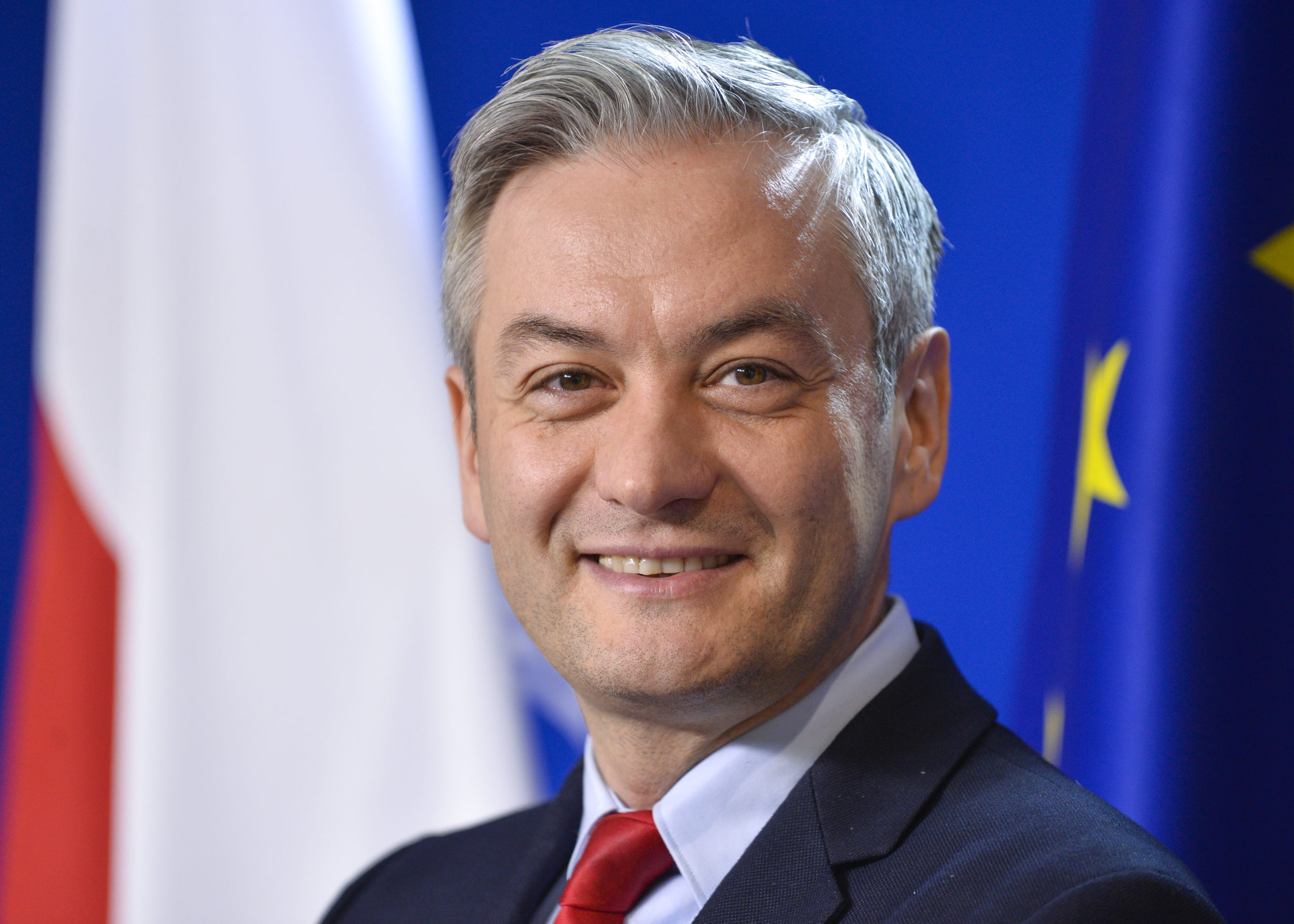 Robert Biedroń is a Polish politician. He was born in 1976 in Rymanów in Southeastern Poland.

He was a member of the Sejm (lower house of the Polish Parliament) from 2011 to 2014. He was the Mayor of Słupsk, a Polish municipality in Northern Poland with 91 000 inhabitants, from 2014 to 2018. He was elected Member of the European Parliament in May 2019 for 5 years. He was a candidate for the Polish presidential election in July 2020.

He is leading a Polish political party, Wiosna (Spring) founded in 2019. He is a LGBT activist since 2001, he was the first Polish politician openly gay in 2011.

He also wrote an autobiography Against the Current (Pod prąd), or on his political reflexions New Chapter (Nowy rozdział) or for children Turn Democracy On (Włącz Demokrację). Since 2016, he is a Knight of the National Order of Merit in France.

It is with pleasure, we started the interview in French, Robert Biedroń speaks very well French.

1/ What are your actions to oppose the so-called LGBT ideology free zones in Poland? What can you do as a Member of the European Parliament?

First of all, we need to show solidarity.

There are different tools: at the EU Parliament; or with my political group, inside the Polish Parliament with legislative proposals.

After, by limiting these functioning zones. Today these zones represent 1/3 of the Polish territory.

To oppose it: by special legislation, anti-discrimination laws, legislation against homophobia.

Besides, the EU Commissioner for Equality, Helena Dalli, said that no EU money from EU funds would be sent to these territories. I support this decision.

It already has an impact: some « communes » (municipalities) have withdrawn this legislation against LGBT persons. It works. EU countries, even other European countries such as Liechtenstein and Norway decide not to grant anymore money to these territories. Money is one of the tools. The decision of the Polish Ministry of Justice to grant money to these « communes » (municipalities): it aims to support homophobia and transphobia.

There is also the rule of law mechanism, according to the article 7 of the Treaty on European Union (suspension of rights, including to vote). I hope not. It will stop all subsidies from EU to countries that violate Human Rights. And send the money to NGOs, local Governments, companies in line with fundamental Human rights.

There are other tools: twinned projects. « Jumelages » (Twinned towns) ended, it is the end of a cooperation between municipalities.

2/ What can we do from France?

In France, many « communes » (municipalities) decided not to have anymore cooperation (with Polish municipalities). It should be continued. In a family, when one does not share the same fundamental basis, he has to be excluded. I very welcome this decision. Otherwise I don’t see the sense of cooperation. People have suffered in Poland.

It is hard because I remember in the 1980’s, there was a strong support from France. French citizens were very helpful, I remember.

In France, you may organise a manifestation in front of the Embassy or the Consulate. To send letters to the Polish Government. To make pressure on the French Government.

3/ Have you discussed it with some French representatives? What actions do they propose ?

Yes, we work with French friends, all democratic forces, political parties, Members of the Parliament, the French Government. We have exchange views, common initiatives, including at the Council of Europe, at the National Parliament. I want to confirm it, our support from French colleagues and also NGOs. I send a « huge merci ».

4/ What do you expect from the European Union, the Commission or the European Parliament? What are their actions?

At the EU, the President Von Der Leyen proposed the document for a responsible LGBTIQ Equality Strategy 2021-2025. It was addressed at the State of the Union.

This strategy is fundamental. Some horizontal directives will come. It is a huge framework. Today, we only have some protections against discrimination in the work place in EU law. With this new framework, it will concern all fields.

5/ Even if this European LGBTQI strategy omit the issue of equal marriage?

On family rights, it is a decision of Member States. I am disappointed and I believe in a union of equality, an equality in all fields.

I fight for ending all discriminations. Equal rights exist in Spain or in France. We have a Community with unequal rights.

And it is the same on women’s rights, about abortion and decisions on our own body, and contraception rights. The goal is equal rights for all.

6/ Does the Polish society accept or fight against LGBT free zones?

About LGBT free zones, democracy is against it. In Poland, there are many prejudices from one part of the Polish society.

Public media, the Catholic Church…homophobia is widespread, fearing people by qualifying LGBT persons as perverts, as a danger for the family, as a bolchevik ideology, and asking for special zones where our rights should be limited.

And people believe it. Democratic forces are too weak outside big cities. With new generations, things are going to change.

International solidarity makes understand that LGBT persons are not a danger. And Polish people realise that changes occur outside and within families.

7/ Is Poland changing with LGBT revendications? Is there a demand for marriage equality? How do you see the evolution for Polish LGBT people?

In abortion rights, now we have stricter rules than in Iran. Poland is becoming a country with medieval values. We struggle for a long time.

The Government is against it because it comes from the Populist right wing, to sacrificing other groups. The Catholic Church has a strong role and many politicians are afraid of it.

Yes, there is a demand for marriage equality. My own political party deposed a bill on Parliament. But there is not so much room for it. Like for other subjects: there is no sexual education, no gender assignment, no law against hate speech, nothing protecting us in Poland.

In 2003, there was the application of the European directive against discrimination at work, it was a condition for accession to the EU. Since then, there is an isolation of us whatever. We are not being protected. We have applied for it.

8/ As a Polish Member of the European Parliament, a candidate for the Polish presidential election, what is your dream for LGBT persons in Poland and in the EU?

Polish society is changing. Not as fast as imagining. We will have more equality, marriage and adoption for same-sex couples, sexual education and so on. We will become a normal country.

I dream that one day we do not have to fight for that. One day, I will be able not only to get married, but for me to imagine the day when, as I am a public person, with 20 years of life with my partner, to take hands in the street. My dream… I cannot do that; people would say something, do something.

We have gay prides, every year, for a few hours. And I went to the European Court for that to happen. I can feel a few hours like heterosexuals, to feel free. I miss it very much.

I love Poland. I am a patriot…To feel free.

9/ Why are you engaged politically? Is it because you are gay that you make politics?

I think so. I come from the most conservative part of Poland, from the South Carpathian region. And as I was growing up, I realised that I was losing my dignity. We only have one life, no second life.

I wanted to live in dignity. So I decided to fight. I made a campaign against homophobia. I became a Member of Parliament. A gay « maire » (Mayor). I made my political party. I was in a local Government.

I will continue this struggle. I am giving up a part of my life for dignity. Youngsters write to me, I am a model to them.

10/ How did you manage to be elected as a politician among homophobia ?

I am a « happy gay ». I tried, I was determined. When people are working together, creating leadership, change with others, not being alone, others help you, they give you energy. A team works whenever you are, it is always to remember. More you are, better, as many as you can.

And I am involved in many issues. For Belarus, I am the Chair of the delegation of the EU Parliament.

Being. The rights of others. Solidarity between different groups is important, equality and long life.